Thanksgiving Day we drove straight from Salt Lake City Airport north 50 miles to the Bear River Migratory Bird Refuge. I was disappointed in the low numbers of waterfowl there. However, straight away we saw a Rough-legged Hawk flying and then perched in a dry field. I could hear Sandhill Cranes creaking and then saw a flock of about 40 or so circling overhead. In the areas with water there were many American Coots, a few American Wigeons, Gadwalls, Northern Shovelers, Pied-billed Grebes, Eared Grebes, and many Ring-billed Gulls. A few Bonaparte’s Gulls were also fishing in the river. Toward the end of the auto tour we came across a few Tundra Swans and some Canada Geese. A Ring-necked Pheasant shot across the road no doubt avoiding all the hunters. Just before leaving the refuge we spotted a Northern Shrike on a post. Back out on I-15 we saw a Ferruginous Hawk flying over a vacant field. 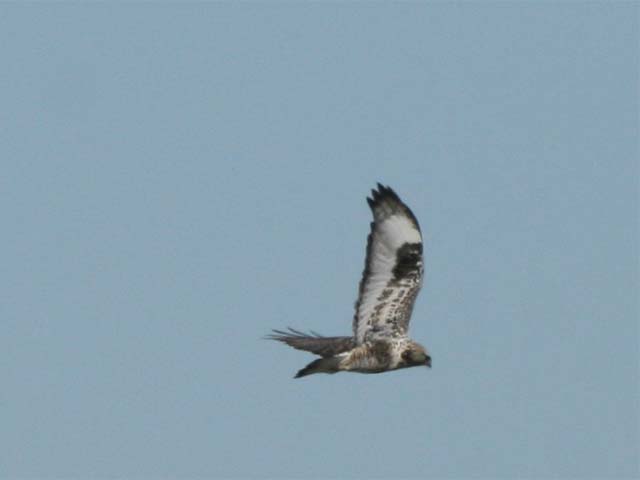 Next we stopped in at Farmington Bay WMA. What we really wanted to do was to visit Antelope Island on the Great Salt Lake but it is closed on Thanksgiving. There were a lot more birds at Farmington Bay including three more Rough-legged Hawks including one locked in a battle with a Northern Harrier, We also saw more Sandhill Cranes, another Belted Kingfisher, Mallard, and one Common Merganser. We were getting hungry so we abandoned plans to find some Bohemian Waxwings which have been having an irruption in Utah lately, and headed over to Fred Meyer to get groceries. Then it was time for the grueling drive down to Calf Creek Falls in Escalante. We did not arrive until 8:30 PM but were surprised to be the only campers there. We had a nice bottle of cabernet we had brought from California to go with our makeshift Thanksgiving Day feast next to a cozy fire before falling fast asleep.

I awoke to a muffled sound outside the tent and thought a deer was browsing. I unzipped the tent and pulled it back to find snow covering the ground. It was still snowing lightly when we got up and had breakfast.
We drove from our campsite, where three Wild Turkeys were foraging, to the Burr Trail and then cut over onto Moody Canyon Road both of which were snow covered. At the cattle gate we came across a flock of 35 Black Rosy-finches, a bird I have never seen before. I got out to get some video but they flew away just as I turned on my camera and we were unable to relocate them so we continued on. Where the road entered the creek bed we parked and began walking into Moody Canyon. There were hundreds of Dark-eyed Juncos in the canyon but little else other than a Red-naped Sapsucker. The canyon began to narrow as it neared the Escalante River but we were running out of time and had to return to the car. Back out on the Burr Trail we watched the sun cast a red glow on the hills as the moon rose.

Saturday we drove from camp 16 miles down the Hole-in-the-Rock Road to Harris Wash. We parked and started down the wash. There were hundreds of Dark-eyed Juncos but also a few Spotted Towhees, Northern Flicker, Downy Woodpecker, Common Raven, American Goldfinches, Song Sparrow, and a few White-crowned Sparrows. A flock of Cedar Waxwings flew over and away. Near the gateway we came across two Great Horned Owls. We passed through the gateway and entered an enchanting canyon with 3000 foot high red walls lined with desert varnish. In the canyon wall I found a Northern Goshawk nest but it was vacant and we did not see it on this trip. We had to turn around just where the canyon was becoming most interesting. We left Hole-in-the-Rock Road and pulled into a scenic pull out on Highway 12 to watch the full moon rise over the Henry Mountains. That night I heard another Great Horned Owl hooting.

Sunday we packed up our things and drove Highway 12 to Capital Reef National Park. On the way we saw a Red-tailed Hawk and a Black-billed Magpie. We hiked up to Hickman Bridge and then to the Rim Overlook. The only birds here were some Mountain Chickadees and a few Juniper Titmouses. We did not have time to make it to Navajo Knobs as we had originally planned. Maybe next year. On the way back to Salt Lake City we saw two adult Bald Eagles in a tree in Fremont, UT. We didn’t see any rare birds like we did last year but I added a life bird, Black Rosy-finch, and the scenery and solitude were sublime.