I would have preferred to camp but was too afraid to do so by myself that close to the border. So I stayed at a hotel in Green Valley, AZ. I drove first to Florida Canyon but as it was midday I only saw Hooded Oriole and Bell’s Vireo. I next went to Madera Canyon and hiked up the trail quite a ways where I found Sulphur-bellied Flycatcher and Plumbeous Vireo. Around Madera Kubo there was a Hepatic Tanager, Berryline Hummingbird, Magnificent Hummingbird, Black-chinned Hummingbird, Cassins’s Kingbird. I parked at the picnic area and saw a Painted Redstart in the trees, Acorn Woodpecker, Black-throated Gray Warbler, and Black-headed Grosbeak. White-throated Swifts flew overhead. That night at Santa Rita Lodge the Elf Owl came just after dark and at the upper parking area I heard Whip-poor-wills and Whiskered Screech-Owl. 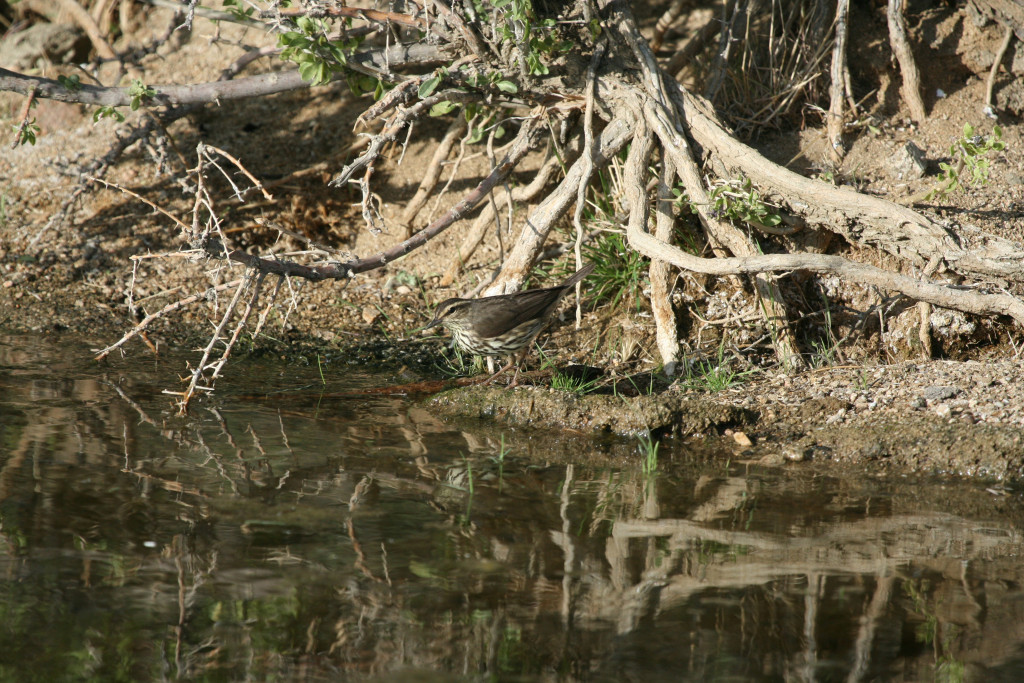 The next day I got up extra early and drove to Ruby Road. I stopped at Pena Blanca Lake and saw Vermillion Flycatcher, Brown-crested Flycatcher, Northern Cardinal, Summer Tanager, Phainopepla, Blue Grosbeak, and one Thick-billed Kingbird. Along the road there was a Cooper’s Hawk, White-winged Dove, and Rufous-crowned Sparrow.

I pulled off to go to California Gulch and not long after heading down the trail found a Five-striped Sparrow. A Varied Bunting came very close. It was an excellent day for a hike very pleasant, no people, lots of butterflies and a life bird. What more can you ask for? I hiked along the stream for quite a ways and saw hundreds of Marine Blue Butterflies as well as Emperor Snouts. There was a Bell’s Vireo with chicks, Canyon Wren, and Canyon Towhee. My friend, Ken, told me to get out before noon so that’s what I did although I could have easily stayed longer. Next I stopped at Patagonia Lake State Park but as it was a holiday they had jacked up the price to $10 and it was packed with picnickers and boaters. I only saw Bell’s Vireo, Broad-billed Hummingbird, Bewick’s Wren, and Great-tailed Grackle. Then I headed back to Madera Canyon. It was getting late but I found a singing Northern Beardless Tyranulet, Painted Redstart, Hepatic Tanager, Whip-poor-will, and Whiskered Screech-owl. There were too many people at the Elf Owl home.

The next day, May 30, I returned to Florida Canyon but saw only White-winged Dove, Varied Bunting, Blue Grosbeak, and Cooper’s Hawk. Then I went back to Madera Canyon. At the first parking lot there were perched Rufous-winged Sparrows singing. I found an Elegant Trogon behind Santa Rita Lodge along with more Sulphur-bellied Flycatchers. There was a Bronzed Cowbird at Madera Kubo and a nesting Plumbeous Vireo. After some redneck Mexicans in a white truck tried to run over me as I was filming the vireo nest I decided to leave and drove all the way to Ramsey Canyon. The Blue-throated Hummingbird nest I was hoping to film was empty. I saw only black-chinned Hummers, more Sulphur-bellied Flycatchers and one hepatic Tanager. I stopped at Roadside Rest and found the nesting Thick-billed kingbird and a Gila Woodpecker nest. A Gray Hawk flew by and there were also some Bridled Titmouses and one singing Yellow-breasted Chat.

On the last day I hiked a long way into Florida Canyon and saw an Arizona Woodpecker and Blue-gray Gnatcatcher. There was some kind of immature flycatcher with a band. At Proctor Road I found Brown-crested Flycatcher nesting in a telephone pole. There was a Black-tailed Gnatcatcher and a Cooper’s Hawk along the trail and a Buff-breasted Flycatcher. Before heading back to the hotel for the night I drove all the way up Mt. Lemmon outside of Tucson. I saw Grace’s Warbler, Olive Warbler, Pygmy Nuthatch, Yellow-eyed Junco, Hairy Woodpecker, and Broad-billed Hummer. After sunset I tried for another Flammulated Owl but only heard Northern Saw-whet Owl calling.