August 18, 2010, I took a 6:00 AM flight to Tucson. After arriving I drove around lost for an hour in 102 heat looking for the grocery store. In Target getting some propane I ran into a lawyer I know whose office is one floor below mine. Finally with everything I needed I headed south on I-19 to Madera Canyon. It was hot and muggy and a few drops fell but there were few birds, just a few Cassin’s Kingbirds and Lesser Goldfinches. I hiked a couple of miles up the Old Baldy Trail but didn’t feel that great after getting up at 3:45 AM. I set up a camp site in the canyon at Bog Springs Campground and then walked around Proctor Road for a bit until the sun got too low. Saw Blue Grosbeak with a worm in its mouth. The sunset was spectacular. Back at my campsite a racoon came and wouldn’t leave but as night fell the Mexican Whip-poor-wills began to sing along with an Elf Owl, Whiskered Screech-Owl, Northern Pygmy Owl, and Common Poorwill. 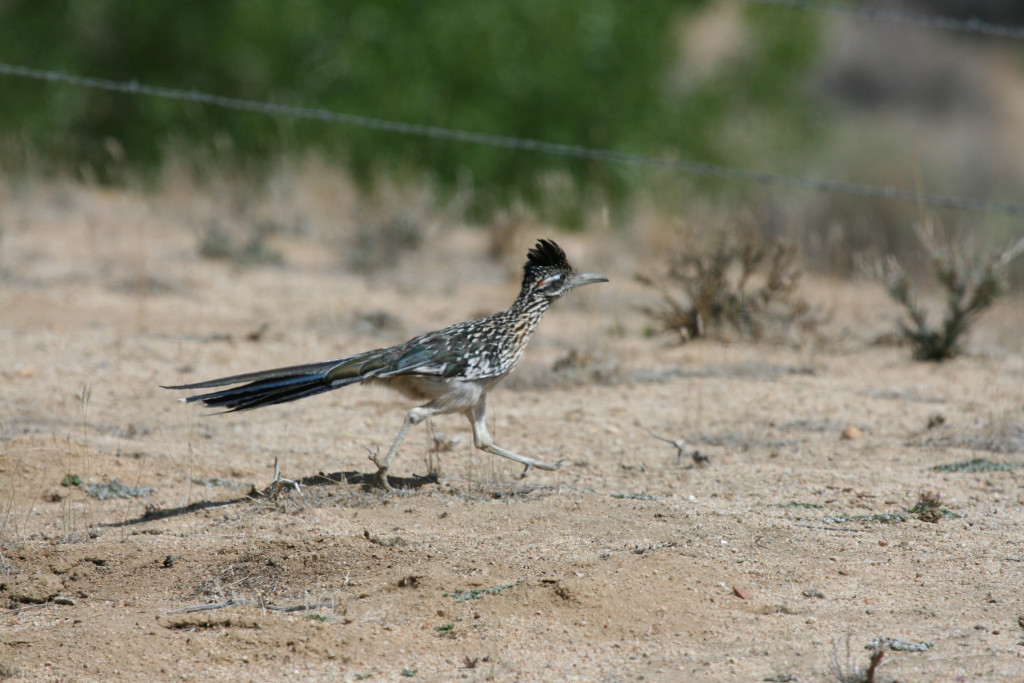 August 19, I woke up late and only left the canyon at 6:00 AM. It took me one hour to drive south to Ruby Road to Pena Blanca Lake. There was not a single person in any of the campgrounds. I saw a Thick-billed Kingbird at the lake. There were a lot of birds on the road including White-winged Dove, Rufous-crowned Sparrow, Varied Bunting, more Cassin’s Kingbirds but not the bird I was looking for, a Montezuma Quail. I drove to Sycamore Canyon and parked. The place was overrun with mosquitoes and I had no repellent. There were three guys taking down their tent. They looked like very inexperienced hikers. I hiked the canyon for about a mile or so before turning around. The water was very high and there were few birds. However, there was many butterflies including many Pipevine Swallowtails, Orange Sulphur, Southern Dogface, Sleepy Orange, Dainty Sulphur, Painted Crescent, Gulf Fritillaries, and Two-tailed Swallowtail. While driving back on Ruby Road I saw a Zone-tailed Hawk circling overhead plus Hooded Oriole and Bronzed Cowbird. I drove around in a big circle because Highway 89 to Patagonia was closed. So I had to drive back north on I-19 to Madera Canyon and then across on the dirt road, Greaterville Road. I stopped along the way and saw dozens of American Snouts on an acacia tree. While looking at them many insects bit the back of my knees. There were Cassin’s and Botteri’s Sparrows singing in the field. I drove past the tiny town of Sonoita south on Highway 82 to Roadside Rest, a famous birding spot. There was a Thick-billed Kingbird, Yellow-breasted Chat, and Gila Woodpecker. From there I drove back north to Las Cienegas Conservation Area where there were lots of Cassin’s and Botteri’s Sparrows, Eastern Meadowlark, and Lucy’s Warbler. There were rolling hills of grasslands to explore but I didn’t like that it was a working ranch full of cows, which I dislike intensely. So I decided to drive to the Chiracahuas. It was a long drive with too much time to think. I saw some Red-tailed Hawks and Turkey Vultures along the way. My intent was to camp at Pinery Campground. But as I crested the canyon at 7000 feet and arrived there a man was already set up with his chair and such so I continued up the canyon. I stopped long enough to bathe and then continued all the way to Rustler Park. I set up the tent, put my food in the bear box, and was very content with my book until I read in Birding Southeast Arizona that marauding bears were a serious problem at Rustler Park. I was the only person there ! Forget that. I took down my tent, threw it in the car, and continued to Cave Creek where I found a lovely site at Sunnyside Flat CG where only one other person was camping. I could hear a faint Whiskered Screech-Owl calling during the night . It was hard to hear because the creek was so full of rushing water.